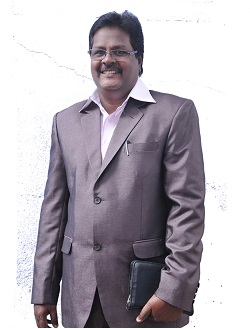 Bro. Jayakaran was born into a Pastor’s family as the third son in the year 1966 in Tindivanam town, Villupuram District, Tamilnadu, India. As a young boy, he was brought up in a God fearing family. When he was 6 years of age, while playing with his brother, he slipped and fell into a well that was at the back yard of their home. After an hour’s struggle, he was pulled out of the well, but by the grace of God, he was perfectly alright. Even at this tender age, the devil had tried to snatch away his life but the Lord protected him. At the age of 8 he was filled by the Holy Spirit in one of the conventions held by his father. The Lord called him to ministry when he was 16 years of age, and he started ministering to the Sunday School Children, teaching in Vacation Bible School and also to the youth. He also involved himself in tract ministry and hospital ministry and also specially prayed for those who were in bondage.

During his engineering college days, he formed different prayer groups to pray for the nation. He also did village ministry. When he had finished his engineering course, he found a job abroad, and there he continued to stand for the Lord, sharing the Good News in the Tamil churches there. After his return to India and while working in a reputed company, he had a vision of hell. The Lord once again spoke to him, giving him a greater burden for the lost souls and also gave him a promise “My grace is sufficient for thee” and blessed him with His spiritual gifts. He received a call for full time ministry in the year 2002. The presence of the Lord is with him. Whenever he prays for people who are in sin, different forms of curses, bondages and sickness, they are delivered by the power of the Lord. The Lord is using Bro. Jayakaran mightily in this ministry. 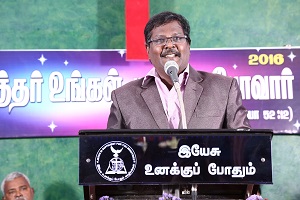 The promise of the Living God “My grace is sufficient for thee” was given to Brother when he fasted and prayed, even before he could accept God’s calling for full time ministry. With this promise he started the “Jesus is Sufficient for You Ministries.” As the Holy Spirit urged him to start his ministries in his native place, he started this ministry in Tindivanam in January 2003. Initially fasting prayers were conducted and prayer cells for the nation were formed. As the days progressed, the ministry saw a tremendous growth on all fronts as the Living God led him. 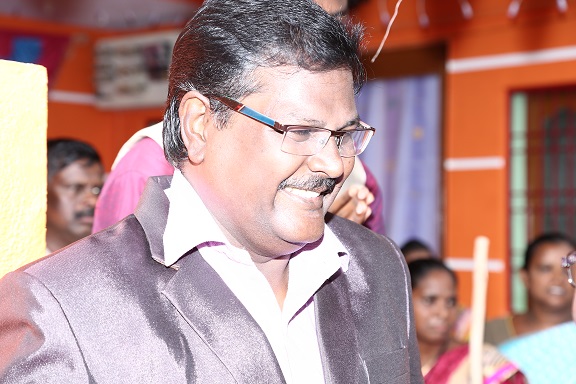 In the year 2003, on November 13th, the ministry was registered as a trust with the Indian Government. With Bro. Jayakaran as the head of the trust, it also has a secretary, treasurer and four other members. The trust is very active in ministering the Word of God to the people and also involves itself in many social activities. The accounts are audited and submitted to relevant authorities every year and the registration number is 65/BK 4 2003 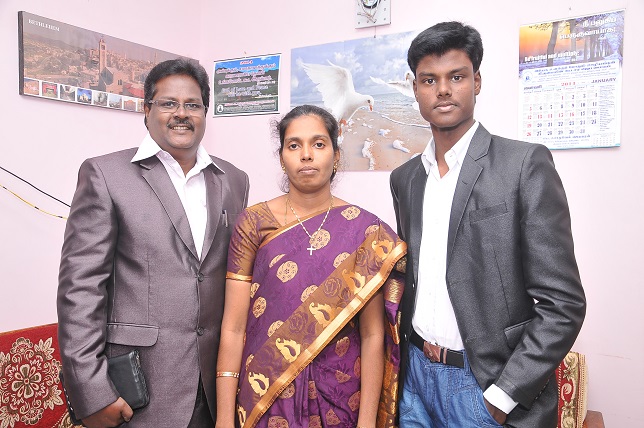 The Lord chose and called our dear brother’s father, Late Pastor. Jayaraj while he was working for the Central Government. Then he came into fulltime ministry in 1970 and began the ministry called ‘Jesus is the answer’ and conducted meetings all around Tamil Nadu and led many people to Christ. Through his ministry, many people were delivered from the bondage of evil spirits and also received healing. His wife Mrs. VimalaSelvaraj (Brother’s mother) was a nurse and was faithful to God in her job. Brother is blessed with three siblings. Eldest sister is a Teacher. Besides her, there are two brothers. The elder brother too serves the Lord and the younger brother is a business man. God has chosen all these children to walk in the truth.

In 1996, Brother got married to Jayakumari. She lost her father at a very small age and was living with her mother. She is a believer who is filled with the Holy Spirit and has a great desire to serve the Lord. She is a great support to Brother in the ministry. She comes from a pious Christian family. Her mother is SuganthiJayadurai, who is a God fearing woman and a prayerful lady, who encourages ministers. Her eldest daughter is a nurse and son is a teacher. Sister Jeyakumari is her youngest daughter. The family lives with God’s spirit.

Brother is blessed with a son. His name is Johan Stanley. He is studying. He is also helpful in Brother’s ministry and also glorifies God by playing music instruments. Kindly pray for Brother’s family and his ministry! 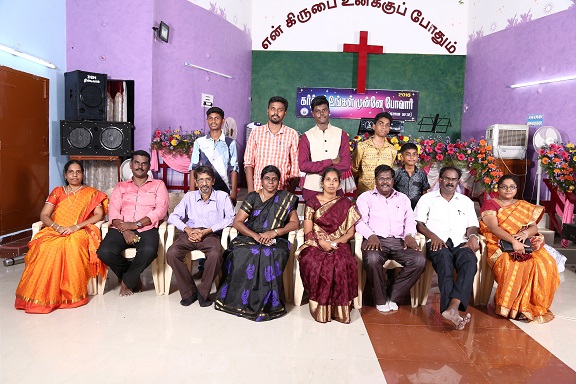